Discover the Gnawa and Chaabi Music in Marrakech 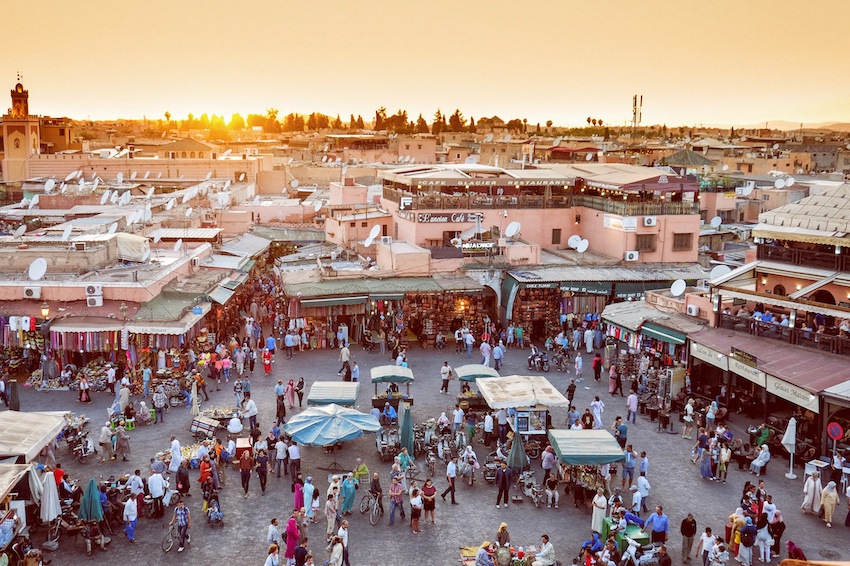 Experiencing Marrakech to the fullest also means immersing in the culture by discovering its various traditions-- including its beautiful music.

If you happen to wander around the medinas, you might encounter the reverberating thrummings and lackadaisical yet energetic rhythms of the Gnawa and Chaabi music. These music traditions in Morocco go back hundreds of years and are played at numerous festivals throughout the country, and in rural areas.

The Chaabi emerged in the 19th century in northern Morocco in the Berber speaking tribes of the Rif Mountains, as a fusion of the Arabo-Andalusian (now flamenco) and Berber music styles. In general, Chaabi is very popular in Morocco, and one cannot avoid hearing it at weddings, festivals and other party celebrations.  It's distinct for its creative fluid style of upbeat rhythms, improvisation, clapping, and energetic dancing. However, since its inception, this style has evolved into different forms over the years-- today, one can hear various Chaabi genres such as Algerian Chaabi, Moroccan Chaabi, and Egyptian Chaabi.

On the other hand, the most African music of Morocco is Gnawa music. It originated from the Gnawa ethnic group in sub-Saharan Africa,-- specifically the Sahara desert-- who were trafficked as slaves to Morocco in the 11th century. The Gnawa have always practised a mystical, more spiritual version of Islam-- fusing Islamic and sub-Saharan traditions together.

Distinct for its brass castanets and its guembri (a kind of three-string bass),  the Gnawa’s enveloping rhythms and its invitation to a trance-like state--after spreading its influence across the world along with jazz and blues, and influencing rockstars such as Jimmy Hendrix, the Rolling Stones, and Led Zeppelin, the Gnawa genre now aspires to become an Intangible Heritage of Humanity.

The Gnawa concert consists of seven stages that correspond to seven colours or states of the soul-- or seven chakras. The audience can attend in a meditative way, losing themselves by the trance-like rhythm of the guembri,  the castanets, and thrumming drums, which are played incessantly by six group members and shift the rhythm by tuning in with the crowd.

But the Gnawa can also be used for therapeutic purposes, provided that the person suffering from psychological problems is willing to let go, enter a trance-like state and discharge their "demons" through dancing.

In other words, for the Gnawa, their world goes far beyond music. The concerts now performed by Gnawa groups worldwide are merely tidbits of a "true Gnawa performance". "A concert is similar to taking an aspirin, yet anyone who wants to get cured must go through the whole Gnawa ritual of the seven stages".


The Chaabi and Gnawa music have a strong connection to the spiritual realm. And the people who play it are often known as highly spiritual. The M'Allems, for instance, are associated as "masters of Chaabi",  as well as powerful mystics. When attending one of the Chaabi festivals or ceremonies and the band players start thrumming the drums and singing haphazardly, the M'Allems appear to draw the audience in and start dancing into a trance-like state.

What makes this musical experience unique is the fact you won't find two identical performances. Each show is entirely different, due to its fluid style, and because the musicians always aspire to connect with their audience in different ways. The Chaabi performers are aware that the people in the audience bring differing mental and emotional states-- and the M'Allem's job is to connect cathartically and spiritually with them by playing different rhythms and melodies. For instance, at Gnawa festivals, one can see how women begin entering this trance state by shaking their head frantically and twirling to-and-fro at the music's rhythm. Once the performance ends, attendees claim to feel lighter and more in harmony with themselves.

These music festivals are not just purely artistic, but also cathartically spiritual and therapeutic. The intense music imitates the dancer's movements and heartbeats-- and becomes a pure interconnected union. Undoubtedly, the Chaabi and Gnawa music wouldn't be as impressive a spectacle without its audience.Their participation and reciprocity to the music beats are essential.

To experience these fantastic music performances in their purest form, one can either go to their birthplaces-- the Sahara desert for the Gnawa, or the Rif Mountains for the Chaabi-- or attend Moroccan festivals many towns and villages hold.

Djmea el Fna, for instance, is a festival which hosts a plethora of cultural performances including Gnawa and Chaabi concerts-- right in the middle of Djmea el Fna square in Marrakech. This festival takes place every evening, yet it starts at full swing at 7 PM-- where storytellers, dancers, and musicians alike start captivating the audience into a delightful and mystical reverie.

Also, Gnaoua Festival is a ritual night-festival which takes place in Essaouira, where people can fully take in the spiritual experience with the accompaniment of the M'allem Chaabi master.

>>> Discover luxury villas in Essaouira
>>> Where to stay in Marrakech