If you travel to Morocco, you will undoubtedly be impressed by its magnificent landscapes and its culture of incomparable richness. Let's discover the Tbourida, an equestrian theatrical sport that dates back to the 15th century, representing a military assault by Arab and Berber warriors. Also called Fantasia, this practice is often associated with religious events and festivals.

Every year, competitions of this traditional sport are organized, and are highly respected among locals. It is a very impressive spectacle, that would be a pity to miss if you stay in the region.

>>> Preparing your trip to Morocco in 5 steps 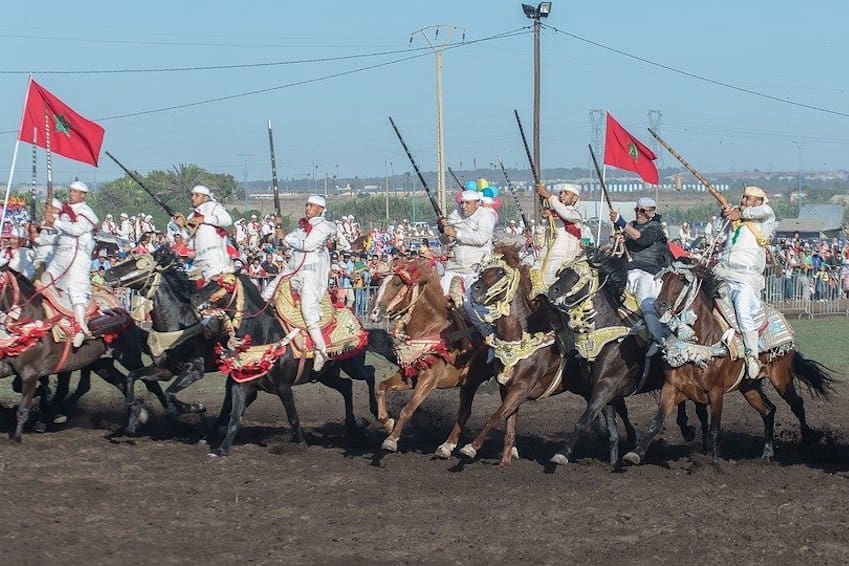 The Tbourida, derived from Baroud, which means "game of gunpowder". This competition simulates a succession of military parades reconstituted according to the ancestral Arab-Amazigh rituals. It consists of a group of ten horsemen called "Sorba" and wear traditional costumes of their tribe. The horses' equipment is also well decorated with beautiful hand-made embroideries, offering a beautiful and very photogenic set.

During the performance, the Sorba are lined up, with the chief of the tribe, called the Mokaddem, in the middle. Under his command, the group charges for about 200 meters until they fire their guns synchronously. This enormous explosion is the apotheosis of the race-- an incredible spectacle that dazzles both the Moroccan and international public because it brings both entertainment and a spirituality together--- the horse being a sacred animal in Islam.

The Tbourida was made famous by Eugène Delacroix, a famous French painter of the 19th century, who made many trips to North Africa and particularly to Morocco in 1832 as part of a diplomatic mission . It was at this time that he discovered the art of Tbourida, and subsequently started creating paintings of it. It was this painter who popularised it under the name of Fantasia.

>>> Our selection of the most beautiful villas in Morocco