A charming escape into the Majorelle garden

Marrakech is the most touristy city in Morocco and it's not for nothing! The city of ochre has a unique and immense heritage. Within its walls, you will find the Medina, classified as a UNESCO World Heritage Site, and the most significant landmark in Marrakech. Between the lively souks, the beauty of the Bahia Palace and the excitement of Jemaa el-Fna Square, the city contains many treasures and the possibilities for activities are endless.

If you are passing through Marrakech, don't miss the majestic Majorelle Garden, a haven of peace for a Zen break sheltered from the city's bustle. This architectural masterpiece is located in the Guéliz district not far from the centre of Marrakech, making it very accessible. Discover one of the most beautiful gardens in the city, if not the most beautiful, and let yourself be dazzled by the magical contrast between Majorelle blue, yellow and the green colour of the vegetation. A real joy for the eyes! Take the opportunity to visit the Berber Ethnology Museum, located in the heart of the garden, and the Yves Saint-Laurent exhibition. A worthwhile visit!

A garden steeped in history

This fabulous botanical garden is named after its founder, the French painter Jacques Majorelle. He fell in love with Morocco after travelling around the country and settled in Marrakech in the 1920s to pursue his career as a painter. In addition to his passion for painting, Jacques Majorelle was a true budding botanist and had a strong interest in Moroccan flora. The Majorelle garden was thus created a few years later thanks to the many plants brought back from the painter's travels. He thus created a villa workshop and planted hundreds of plants from Morocco or other exotic places around it. The painter also invented the majorelle blue, an intense blue tinged with purple reflections, which he used to paint his home and garden.

When Jacque Majorelle died, the property was abandoned for several years. Many developers wanted to build a hotel complex there, but the designer Yves Saint-Laurent and his friend Pierre Bergé bought the land in 1980 to save it and restore it. The two friends completely recreated Majorelle's world and transformed the old villa into a museum dedicated to Berber culture. A garden with a captivating atmosphere that now belongs to the Jardin Majorelle Foundation. 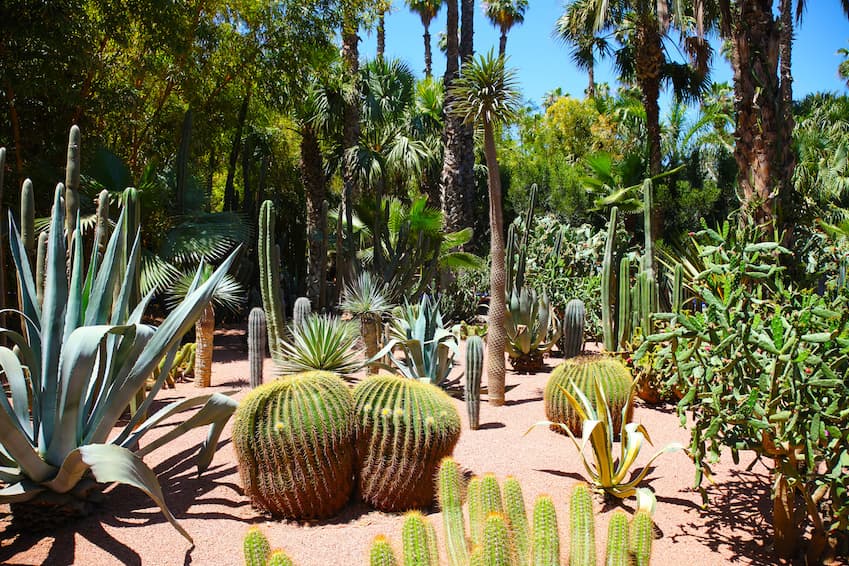 The Majorelle garden, an ode to tranquility

Every year, many tourists flock to the Majorelle Garden in search of tranquility and relaxation. Although this garden attracts many visitors, it is still as popular as ever because of its authenticity and rarity. You will be able to discover Majorelle's mythical work, a mixture of Islamic and tropical gardens in different colours and shapes spread over almost a hectare. You will find a luxuriant flora where bamboos, agave, palm trees, cypress trees, carob trees, jasmines, bougainvilleas and many other species from the five continents live together. All of this is accompanied by magnificent pools, fountains, water jets, ceramic jars in yellow and majorelle blue, and pergolas to make this little corner of paradise even more exceptional.

In the centre of the garden, not far from the Berber museum, you will be amazed by the beauty of the large square fountain, entirely painted in majorelle blue. Its colours contrast perfectly with the surrounding plants, creating a magical atmosphere. You will also find the Yves Saint-Laurent Memorial, nestled between trees and plants. A Roman column that was recovered from Tangier beach now stands on a red base decorated with a plaque in the name of the fashion designer Yves Saint-Laurent. You will be able to sit and rest on one of the two white marble benches.

During the hot hours of the day, visitors come to seek a bit of freshness in the middle of this lush vegetation and the basins where water lilies and papyrus flourish. A serene and peaceful atmosphere just a few kilometres from the hustle and bustle of the Medina. Majorelle and Saint-Laurent came to draw their inspiration from the heart of this incredible garden dominated by majorelle blue. 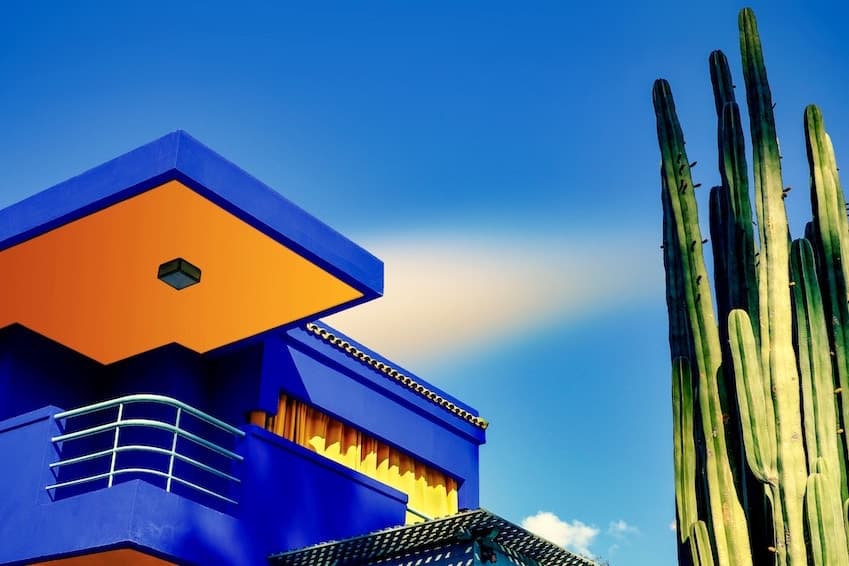 A Berber museum in the midst of rich vegetation

The Berber Museum of the Majorelle Garden is a must. Located in the middle of the garden, the latter replaced Jacques Majorelle's old workshop and was inaugurated at the end of 2011. This museum, easily recognizable thanks to its Art Deco style and its walls entirely painted majorelle blue with touches of yellow, pays tribute to the Berber population, which is the majority ethnic group in Morocco, by highlighting the richness and complexity of their culture, rites and beliefs through a sublime collection of objects of all kinds.

You will have the opportunity to discover the personal collections of businessman Pierre Bergé, a great admirer of Berber culture and art, who collected a total of nearly 600 objects from his travels all over Morocco, ranging from the Rif to the Sahara. Clothes, furniture, musical instruments, accessories... So many exceptional pieces exhibited in four thematic rooms and decorated with explanatory cartels in English, French and Arabic.

In addition to your visit, you will also find a café-restaurant to shelter from the Moroccan heat, a fashion boutique, a bookstore containing books on Berber culture and a gallery displaying posters of Saint-Laurent.